Our Friend Roy Fixes Our Antique Clock From The Afterlife

Roy Fawcett passed away on March 31st.  He was what many would like to claim to be, a legend in his own time. Roy was renowned world wide for his organs and pianos. He was a force in life and, apparently, after life as well.  His wife Shirley said she hoped to have a sign from him from the other side.  This definitely was it.

My husband, Pierre, and I are new to Winchester and Roy and Shirley were the only people we knew.  Need I say we met Roy through his organ selling business.  His impression on us was stellar. When we moved to our new dwelling in town, we invited Roy and Shirley over for lunch. It was then we learned that Roy had also been in the clock and watch business and knew a few things about tick and tock.  What a coininkydink that I had an antique clock on the mantle that hadn’t worked in 20 years.  With my temptation to ask and his enthusiasm to look, he did indeed examine the clock and tried to fix it.  Even then Roy’s eyesight was failing him. I admired his determination.

Unfortunately, the clock did not work after Roy’s efforts.  This was all the more reason I was astounded that day I walked through the dining room and heard the pretty chimes that had been quieted for so long. The clock was working! After a moment of being mesmerized, I got a chill and the thought of Roy flashed through my mind. I said to Pierre that he better call Roy and see how he is.  It was then we learned he had just passed two days before.

The clock still ticks and chimes.  There won’t be a day that goes by that I won’t think of Roy Fawcett.. 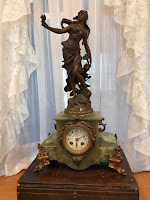