Cannabis in the Ancient World

The world’s first hot box, and other uses of cannabis in the ancient World 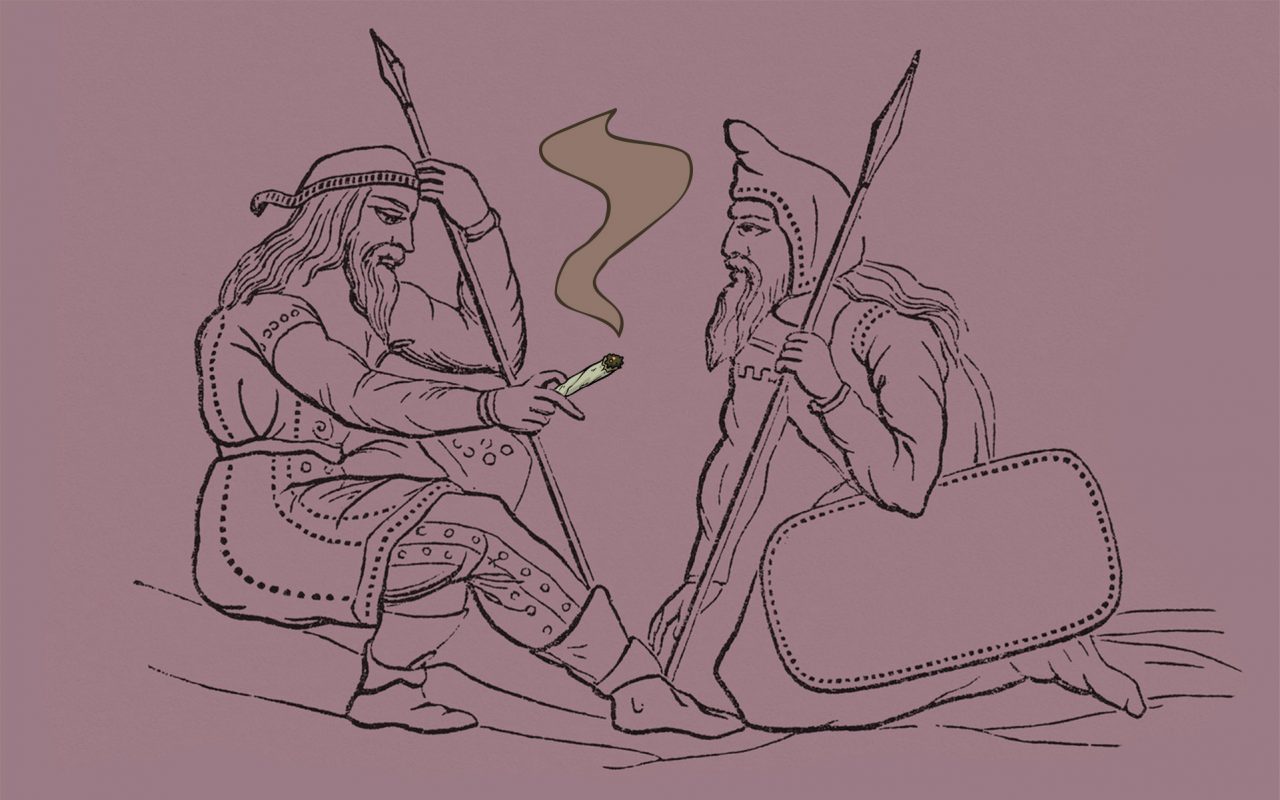 (ZU_09/iStock)
Carl Sagan once speculated that cannabis may have been the very plant that inspired the age of agriculture. The first crop so useful that some long forgotten nomadic foraging society decided to stop roaming around in favor of becoming farmers.


Obviously that’s just conjecture—and Sagan was a notorious cannabis enthusiast, so perhaps it should be taken with an extra grain of salt. But even if cannabis wasn’t the first agricultural product on planet Earth, we do know that human use dates back around 10,000 years.
For perspective, at that time there were still a few woolly mammoths and saber-toothed tigers running around, though they were in the process of going extinct. Cannabis, meanwhile, was about to begin a long, strange relationship with humanity in which the plant would be both joyously extolled and ruthlessly exterminated

Most of our earliest evidence of cannabis use concerns textiles, food, medicine, and other industrial uses that were likely derived from low-THC plants similar to what today we would call hemp. But obviously someone was the first person to purposely use cannabis to get high, though we’ll sadly never know the true story of that ultimate ancient OG.
At this point, the farthest back we can go to find irrefutable evidence of humans getting lifted by smoking cannabis is about 3,000 years. And that’s only because last month, a team of researchers at the Chinese Academy of Sciences shared evidence showing that pieces of charred wood they recovered from a tomb in Western China, circa 500 BC, tested positive for THC.
Well, not the wood itself, but the residue of whatever was ritualistically burned on top of it. Which means that mourners basically crowded into the tomb, lit up some cannabis on top of a wooden altar, and settled in for a smoky send-off.
Researchers also recovered the remains of a musical instrument called an angular harp in the tombs, a finding which lead archeologist Yimin Yang to reason that getting high and playing harp both figured prominently in the last rites of the era:

We can start to piece together an image of funerary rites that included flames, rhythmic music, and hallucinogen smoke, all intended to guide people into an altered state of mind.

Proliferation of the plant

Also worth noting, the location of the tombs in the Pamir Mountains of Western China place them squarely along the ancient Silk Road trade route that once stretched from Asia to Europe and the Middle East. According to Robert Spengler, laboratory director at the Max Planck Institute for the Science of Human History and a co-author of the study, the Silk Road was a key way that commodities and customs moved throughout the ancient world.

Plants were one of the major commodities to move along these trans-Eurasian exchange routes, and in so doing largely reshaped the foods in all of our kitchens today. I think with this new study, we can now actually place cannabis within that list as well, as being one of these crops that originates on these ancient trade routes.

And from there, cannabis reached the entire world.
Of course, it helps to have a plant species that can adapt to grow in almost any climate. But the real key factor in this great migration has always been how much some people love this plant. Enough to risk going to jail.
But that all came much later. The first known prohibition of cannabis didn’t happen until 1253 AD, when Egyptian authorities started targeting for arrest a group of hashish-smoking Sufis who planted a communal, municipal cannabis garden in a public park in the middle of Cairo. Those caught growing cannabis faced capital punishment, while mere hashish-eaters only had their teeth yanked out. A harbinger of dark times to come.
But thankfully, all of the cultures chronicled in our compendium of the ancient world’s biggest cannabis enthusiasts existed at a time when the plant was not only permitted, it was celebrated

Emperor Shennong (sometimes “Shen-Nung”) is a revered figure to this day in China, where he’s seen as the father of both modern agriculture and herbal medicine. He’s also credited with making the earliest known recorded mention of cannabis as a medicinal plant.
According to legend, Shennong—also known as “the divine farmer”—personally ingested hundreds of wild herbs in search of those with healing properties. The Divine Farmer’s Herb Root Classic, which compiled his findings, is one of the world’s first pharmacopoeia, and lists cannabis among the “supreme elixirs of immortality,” praising its female flowers specifically as a superior treatment for “constipation, ‘female weakness,’ gout, malaria, rheumatism, and absentmindedness.”

The first known documentation of cannabis as a spiritual aid comes in The Atharvaveda, one of the four vedas comprising the oldest scriptural Hindu text. Particularly associated with the playful god Shiva, cannabis is listed among the text’s five sacred plants, where it’s praised for bringing joy and relieving anxiety.
Shiva—the Hindu god of transformation—is well-known for being particularly fond of bhang—a cannabis drink—which is also a recognized part of Ayurvedic medicine as a treatment for fever, digestive problems, immune support, and even a flagging libido.
With both its spiritual and medicinal traditions well-documented, bhang offers some of the earliest detailed accounts of cannabis use in the ancient world. And it’s a tradition that continues today in parts of India, where government-run shops sell bhang, and consumption is extremely widespread during certain festivals honoring Shiva.
Bhang itself is made in a mortar and pestle, by grinding cannabis into a paste. A common preparation is the bhang lassi, an intensely flavorful milkshake-like beverage redolent with spices and an earthy hint of cannabis.
Leafly recommends a recipe that includes almonds, pistachios, rose petals, mint leaves, garam masala, ginger, fennel, anise, cardamom, rosewater, and honey.

The Ancient Greek scholar Herodotus is often referred to as “the father of history,” and can also lay claim to being the first European to write about cannabis. He traveled far and wide to research his histories, and over time became fascinated by the many different customs and cultures he encountered.
When Herodotus undertook a study of the ancient Scythians, a nomadic group of traders originally from the Altai Mountains in Southern Siberia, he recorded that their personal grooming regimen was actually a giant hot box:

They make a booth by fixing in the ground three sticks inclined towards one another, and stretching around them woollen felts, which they arrange so as to fit as close as possible: inside the booth a dish is placed upon the ground, into which they put a number of red-hot stones, and then add some hemp-seed … immediately it smokes, and gives out such a vapour as no Grecian vapour-bath can exceed; the Scyths, delighted, shout for joy.

And oh yeah, the Scythians also smoked out of solid gold bongs.

Cannabis for the afterlife (500 BCE, Siberia)

In 1993, the mummified body of a Siberian woman was unearthed from under thick ice in the Altai Mountains of Eastern Russia after being buried for 2,500 years. The body was so well preserved her tattoos were distinguishable.
Dubbed an “ice princess” due to the expensive clothes she was buried in and the fine craftsmanship of her jewelry and coffin, the well-preserved body and pricey items she was buried with gave a wealth of clues about her life.
One enduring mystery was the cause of death for a woman who appeared to be in her early 20s when she met her end. That is until a team of Russian scientists used MRI scans to diagnose the ice princess with breast cancer. Which may explain why a pouch of cannabis was buried with her alongside all the other treasures.
There’s also speculation that she may have been a shaman who used cannabis as part of spiritual plant-healing ceremonies.

Morocco boasts an uninterrupted hashish-making culture as old as any wine region, and to this day, it is designated by the United Nations as the world’s leading producer of cannabis.
Much of Morocco’s hashish is still produced in and around the Rif Mountains, where Berber villages have been cultivating cannabis and dry-sifting it into potent concentrates using traditional methods for countless generations.
The Berbers are also credited with creating mahjoun (sometimes “majoun” or “majoon”), a 1,000-year old recipe for a hashish-powered confection that’s the spiritual and psychoactive ancestor of all modern edibles.
Much as every Italian grandmother holds fast to the family’s secret recipe for tomato gravy, a Moroccan family would have their own unique way to prepare mahjoun. A traditional version begins with a thick paste of figs, dates, hashish, butter, and ground nuts that then get coated in savory-sweet-spicy flavorings like honey, rosewater, sea salt, turmeric, cardamom, ginger, cinnamon, and lavender.
Dr. Pierre Milot, PhD., PhD. (tc)
Therapeutic / Grief Recovery Counsellor
Certified Medical Cannabis Counsellor
Redmond House, Winchester ON.
Tel: 343 549 1650 / 613.774.4389
E-mail: drpierremilot@mail.com
Website: http://www.coaching4life.ca